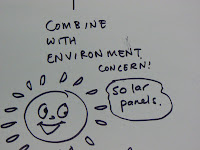 If there was any doubt about the continued enthusiasm of politicians to provide a strong signal in favour of entrpreneurship - you should take a look at Gordon Brown's speech on the link below.

It seems to me that Mr Brown is among the few politicians or country leaders that "gets-it" with respect to the potential for transformation that entrepeneurs have in their societies. If you were to follow the further links after watching the video - you will see how long and how widespread has been the movement to encourage and empower people to make a difference.
For those of us in enterprise development itis a great delight to see this social movement gainign pace. The celebration of endeavour and success, rathter than envy and scepticism. The tolerance of failure rather than mocking and ridicule. Long may it continue.
So - it still puzzles me that there are economic policies and legislation that constrain people! The threat of freeing the human spirit seems so powerful in some countries (and Institutions) that the country itself runs backwards.
For example - in Poland and indeed elsewhere, Uniervsity Professors are not allowed to have company directorships. Neither are they allowed ownership of intellectual property. The latter I can understand - because in the end IP needs to be vested to a legal entity that can have the rights to negotiation etc.,
But - why would countries - that can see the evidence of economic and human resource policies that are liberal - still continue with top down controls?
Much of continental Europe is held back by these kinds of backward policies, not to mention the continued nonsense of subsidised agriculatre that is holding back the WTO discussions on free and fair trade.
I hope this blog (and more importantly the message of "Mark your Mark") reaches those parts of the EU that normal people cannot reach!
For those of you who are able to influence policy to attain liberty, equality and fraternity - say something!